The Meeting. Does the word send shivers up your spine? For many, the concept can be an unpleasant one. On the other hand, I have always been somewhat fond of meetings. Climate Summer is replete with meetings, and this week, I have been doing a lot of thinking about them.

Part one: What is a meeting good for?

Monday night we attended an SJSF Bylaws Committee Meeting at Katie Macdonald’s house. After a summer of seeing so many organizations, so many campaigns, and so many meetings, it was really interesting to sit back and think about how a group might run at its best. What is the best way to run a meeting? How many members form a good decision making group?

In my college Psych 101 class, we learned that contrary to popular belief, group brainstorming is pretty ineffective. Since then, I have wondered if there are other ways that meetings could be improved. We debated the meaning of a thumbs sideways vote verses a thumbs down vote at the bylaws meeting. We considered the number of people needed to make a decision on the expenditure of $75. While it was exciting to be a part of the decision making process, it was tedious, too. And as our discussions kept exceeding the time limits that we set for them, I couldn’t help but wonder whether procedure could sometimes be as harmful as it was helpful. Dinner arrived and we put discussion aside for a little while.

Tuesday night we attended the Winchester Climate Action Task Force meeting. It was then I realized the expertise I had gained. I was able to follow their conversation because I had been to so many similar discussions over the summer. Not only that, but I know so much more about climate change and sustainability from constantly reading and speaking to folks and researching these past two months. And because I was so “in the know,” I remembered a great thing about activism: when you take a stand for something, you become part of it. So even if I’m not the most informed educator or the more organized activist, I had devoted time to fighting climate change, and in that way have become a part of that movement. I was inspired to hear about the amazing work that the CATF is doing: an action plan for the residential, commercial, and municipal sectors of the town. And I was excited to share my ideas with them, as well as hear about their plans and think about other communities with whom I could share those ideas. A meeting implies, well, meeting with someone. You find out who they are, they find out who you are. You exchange information and both walk out with more than you came with. The more I keep at it, the more I have to share.

Wednesday night we met up with the Western Mass team and went into Boston for the weekly SJSF meeting. To my surprise, we discussed the bylaws and then voted them in…all ahead of schedule! The meeting was a wonderful mix of presentation, large group discussion, and break-out groups. We stayed on time or ahead of time, we were engaged, and when we evaluated the meeting at the end, the main suggestion was to get cookies for the next week. Perhaps this meeting was an anomaly, but maybe not. I am still searching for the best way to run a meeting, but for now I am satisfied that hope is not lost. I think our passion to stop climate change can withstand a few long meetings. 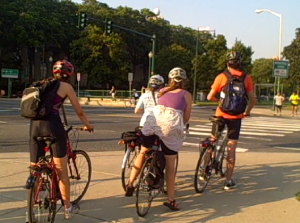 On our way into Boston!

Readers: What are some of the tactics you know of that help to run a successful meeting?

This entry was posted in Uncategorized. Bookmark the permalink.

1 Response to The Meeting