A Tale of Biblical Proportions

Written by Becky Palermo, Media Coordinator, Team Massachusetts
The Massachusetts team recently had our first taste of real climate change: the basement of the church we were staying at (you know, where we’re sleeping on the floor) was flooded after a particularly heavy storm. We resorted to combating that with the most unenvironmentally-friendly use of six — yes, six — electrical fans and lots of mops.

Me at the Boston-Area Climate Experiment.

The point of this story is that what I’m most upset about is that I couldn’t get to the chocolate-chip oatmeal bars, which were on the other side of the kitchen. (because we’re on a strict food budget, but I can’t sacrifice chocolate baked goods, obviously.) So I mopped my way into the kitchen and then stopped for an oatmeal break.
In a microcosm, this is what we are working to prevent. Extreme acts of weather that could endanger systems of infrastructure and keep people away from their basic necessities (yes, chocolate is a basic necessity). Droughts like the one that much of the US is currently experiencing is often having negative impacts on so many of the farms we have visited. Agape Community, where we stayed overnight on the way to Northampton, is only one of the many places suffering from water shortages in the midst of this hot weather, which can have a huge effect on daily life. This flooding was a small incident but in some ways represents larger struggles that are happening everywhere.

Don’t worry, everything dried out, the rain has stopped after four hours (not nearly forty days), and the chocolate was moved to a more secure location.
In conclusion, climate change is bad: it puts floods between you and the food. 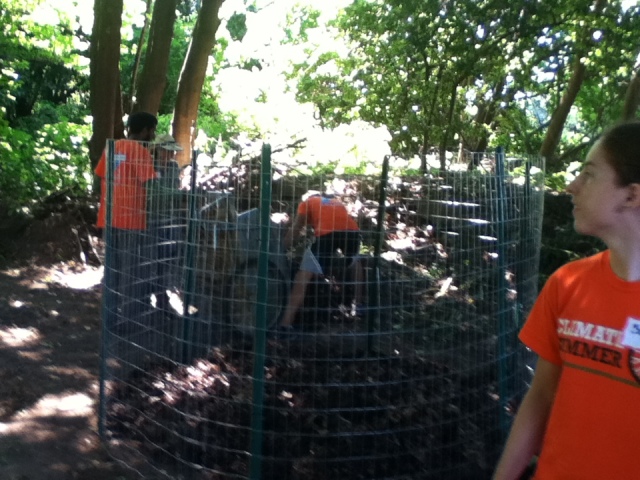 The team builds one of two compost piles at the Waltham Community Farm.