People often ask, what is the purpose of Climate Summer? Our response is, “to build the climate justice movement.”[1]

While the phrase ‘climate justice’ is an articulate description, it is rather confusing. Furthermore, the explanation is difficult to convey in a brief encounter with someone. Having spent the last five weeks in five different communities, I can assert with confidence that esoteric phrases like this, followed up with insufficient clarification, severely handicap the movement’s ability to grow.

This discovery emerged after Team Maine revamped its messaging when inviting residents out to an event called a climate café. Ever heard the phrase ‘third time’s a charm’? Well it took us three tries to finally understand how to approach people about our event.

Compare our first flier (left) for our climate café in Portland. It uses phrases such as “a climate café in collaboration with Climate Summer Riders” and to come for “great conversation about Portland’s future in climate justice.”  In contrast, our third flier (right) that we distributed in Waterville reads, “share ideas and snacks with the Maine Climate Riders” and explains that the riders are “biking 1500 miles to meet you.” 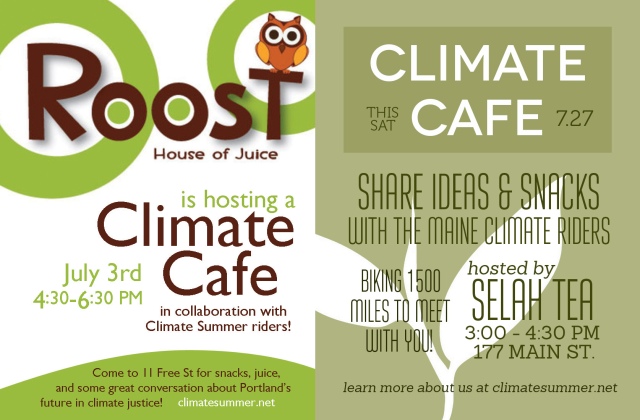 If I stopped you at your farmers market and invited you to both of these events and described them as such, which would interest you more?

We have overwhelmingly found that residents are much more receptive to simpler language and more relaxed gatherings. Not only did we have many more attendees at our climate café at Selah Tea in Waterville, but our fliers were also better-received when we introduced them as ‘Hey, what are you doing this Saturday? Why not come and hangout with us?’ as opposed to ‘Come join us at our climate café!’

While the name climate café certainly has a nice alliteration; we discovered through trial and error, the title was not descriptive nor inviting enough. While all of us inherently know the importance of making sure the work we do and the movement itself is approachable, experience assures us there is room for improvement.

Letter-writing at the Waterville climate cafe

[1] Climate justice is advocating for a rapid and responsible transition away from fossil fuels in order to minimize climate change, so that certain peoples and their environment are not forced to disproportionately endure the intrinsic catastrophes caused by climate change.