On Beans and Hearts

Last night, we burned chickpeas. They were boiling in a pot of water, completely submerged, but somehow, they burned. I’m not sure it’s ever happened before in the history of chickpeas. We tried to grind them up into hummus anyway, but they were burnt and undercooked, so our hummus was essentially inedible. For the first time, we threw away some of our food. Last week, we soaked the chickpeas too long and they fermented, but we made hummus anyway and farted for the next few days. Another time, we soaked the chickpeas and boiled them (almost) long enough, but didn’t have enough time to spice them, so our hummus was, again, sub-par. I think we’ve tried to make hummus at least 5 times, but apart from maybe once, it’s been less-than-successful. Sometimes, it feels like, as a team, we are largely incompetent. Like when we forget to soak the beans- again. Or when it takes us an hour to get out the door in the morning, or when Ariel’s tube popped out of her tire and got caught in her bike chain (another first in history I believe). 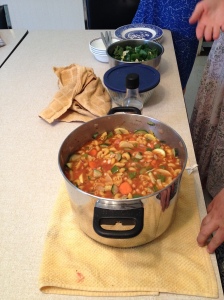 It’s really easy to get frustrated when we can’t even boil beans correctly. How can we stop the most powerful industry in the history of the world if we don’t have the foresight to soak beaks the night before? Sometime it feels like every waking moment this summer is spent fighting to mitigate climate change, and so every little failure can feel gigantic, or every act that isn’t wholly strategic can feel worthless.

In reality, these small acts, like building sandcastles and tabling farmers markets, aren’t insignificant. This movement must be built of hundreds of smaller strategies, and maybe one will catch on and inspire others to join, or maybe it won’t, but the point is that we have to try everything. We can’t know what effect each act might have on someone else. Perhaps, listening to my poem will be the spark for someone, leading them to start getting involved, or maybe it will be one of a hundred little things on their path to joining the movement. I know I didn’t join because of one thing someone said to me, but rather because of hundred of conversations and articles and eventually an opportunity. We can try to be the most strategic we can, minimizing wasted time, but at the end of the day sometimes our chickpeas are burnt and raw, and sometimes they aren’t. We have to learn to be patient. 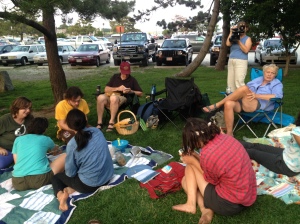 The team at a picnic with JD’s fabulous hummus.

I feel most hopeful meeting folks out in the communities because it reminds me that, with time, change can happen. Like Erin, who, after many years of different occupations, opened the New Harmony Farm, a more-than-organic community-oriented farm where she leads workshops on meditation and art-making. Or Conrad, who started a Transition community in Newburyport and leads twelve week trainings to give people skills and confidence to take action. Or JD, who brought delicious smooth tahini-filled hummus to our potluck. It was a revelation. We’ve been eating terrible hummus for the past four weeks. We asked him how he made it, and the key is to have patience. We need to let our beans cook much much longer to get them soft and supple to mash into a perfect spread. I’m pretty sure we can do it. The key is to not give up, and accept the fact that sometimes, things take longer than you’d expect.