On Breaking and Losing Stuff

After almost 7 weeks on the road, I’ve managed to lose my retainer, my laptop charger, my front fender’s mudguard, and about 20 rubber bands (they held my clothes in rolls). I’ve managed to snap my bicycle’s rear rim, snap my chain breaker in two, rip a six inch hole on my cargo shorts, and spot two small tears on one of my panniers. What have I learned? Breaking or losing stuff sucks.

We “lost” the road. Lesson: Google Maps doesn’t know if a road will flood.

But there’s a plus side. Whenever something breaks, I try to treat it as an opportunity to learn. When I snapped my bicycle’s rear tire rim and didn’t know how to build a wheel using a new rim, I made a mental note to read about wheel building with Park Tool’s mechanic book and several wheel-building YouTube videos. When I snapped my chain breaker in two, I learned to always link a chain with proper sized pegs and to avoid rushing a repair–even when under time pressure. When I spotted a small centimeter-sized hole in my cargo shorts, I realized that I needed to learn how to sew. When I failed to learn how to sew, I noticed that the hole widened to 2 inches, 3 inches, and eventually, 6 inches. I learned, the hard way, that “a stitch in time saves 9” (I will learn how to mend when I get back to Amherst). As for the two small holes in my pannier, since I didn’t have nylon thread available, I learned that improvising temporary fixes can be better than allowing a tear to widen (I used duct tape, in case you were wondering).

Whenever something is lost, I also treat it as an opportunity to learn. I’ve been trying to remember why the things I lost were misplaced to begin with. The retainers were lost because I didn’t always have their case with me, so I’d unconsciously lay the two transparent teeth molds down on the nearest surface, like grass. When I finally lost them, I learned to always be mindful when I grab something up or place something down. The laptop charger was lost because I would disconnect it from my laptop and walk away to work someplace else. When I finally lost it, I learned to avoid leaving things lying around haphazardly, even when I’m not using them. My front fender’s mudguard was lost because the bolt fastening it to the fender eventually loosened off from road vibration. When I noticed that my fender was missing the mudguard, I learned to check my bike more often and more thoroughly. The rubber bands were lost because they were small. When I realized I only had about 5 left, I learned to roll my clothes without using rubber bands (I use clothing’s sleeves or pockets to hold them together). 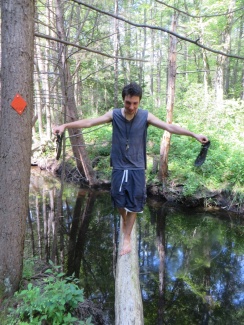 Whether you lose or break something, if you’d like to retain your joy, it’s also useful to think that most of everything material in this world has a finite durability – and it’s more than likely replaceable. I will be able to replace every single material thing I lost or broke this summer, but the experiences and lessons I’ve learned as a result of these things breaking or becoming lost will serve me for the rest of my life.

The goal is to avoid breaking or losing stuff – it costs materials and money to replace things. When you do break or lose something though, if you can – after the initial frustration and annoyance fades – try to treat every broken or lost piece of “stuff” as a way to learn a new skill or life lesson. And try your best to not beat yourself up over the mishap; remember that the object is most likely replaceable.

My name is Nicholas Jansen and I'm entering my fourth and last year at the University of Michigan. My major is Program in the Environment (PitE) with a specialization in water.
View all posts by njansen16 →
This entry was posted in 2014, Team East, Team Massachusetts and tagged #ClimateLegacy, #climatesummer, biking, biking on the road, Climate Change, climate summer, improvision, learning, Life Lessons, losing stuff, repairs. Bookmark the permalink.