From One Mic, Many Perspectives

Posted on behalf of Kay Young, Team Leader, Team For the MASSes.

The natural gas industry has successfully marketed natural gas as the clean and safe bridge fuel that will transition the U.S. to a future sustained by renewable energy. Once I found out the disastrous effects of natural gas wrought by its extraction, transportation, and combustion, it 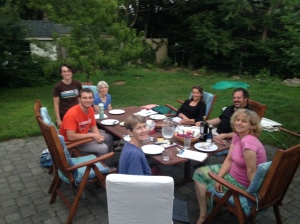 Members of the 350 MA Metro West node and Climate Summer reflect on how to craft effective stories.

became clear that that notion is just marketing. Natural gas is a bridge to nowhere. This summer, I was tasked with shattering the pristine image of natural gas not singularly by raising awareness about the scientific evidence but also by collecting stories as we traveled from city to town. These stories illuminate the reality of the implications that fossil fuels continue to bear on communities across America and the planet.

To be honest, asking a person to be interviewed is nerve-wracking — not because I’m shy, not because I’m intimidated (OK, maybe a little), but because I’m asking someone to divulge his or her intimate thoughts about complex issues that either immediately threaten his or her health or weigh upon his or her psyche in a major way. Despite my hesitations — at rallies, at film screenings, and at coffee hours — I asked people to trust me with deep parts of themselves. The result was stunning. From so many perspectives, a multifaceted picture of the fossil fuel resistance was painted. The people engaged in addressing climate change fight for progress for so many different reasons. Unfortunately, the full spectrum of perspectives and identities espoused in the Movement are not presented in the main narrative when environmental issues are aired on major platforms.

As an ever growing movement working to address an issue whose complexity is expounded by intricate layers of social, political, and economic implications, we need to take every 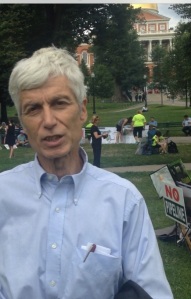 Mike from Boston Climate Action Network telling Climate Summer the urgency with which we need to act on climate change at the Boston Rally against the Kinder Morgan proposed pipeline.

opportunity to deepen our perspective. We need to engage people from communities of different socioeconomic statuses, size, and ethnicity so that together we can build a better future with each other, not for one another.

This entry was posted in Team For the MASSes, Team Massachusetts and tagged #BetterFuture, #interviews, #natrualgas, Boston Action Network, climatechange. Bookmark the permalink.